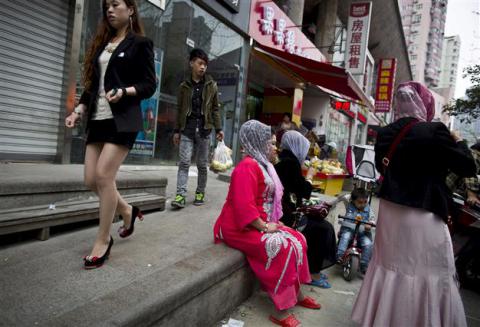 A Han woman walks past Uighur women in Shanghai, in this April 11, 2014 file photo. Reuters Photo

China will prosecute the former editor-in-chief of the official Communist Party publication in the violence-prone far western region of Xinjiang on charges of corruption after he expressed doubt about government policies, the paper said on Nov. 2.

Hundreds have died in the last few years in Xinjiang unrest blamed by the government on Islamist militants.

Rights groups and exiles say controls on the religion and culture of the Muslim Uighur people who call the region home are more to blame for the violent outbreaks. China denies any such repression takes place.

Zhao Xinwei had run the Xinjiang Daily until he was put under investigation in May for suspected "serious discipline breaches", a term that generally refers to graft.

An investigation has found that Zhao "improperly discussed" party policies in Xinjiang and "publicly made comments in opposition" to how the party conducted itself in the region, the newspaper said in a terse front page report.

"(His) words and deeds were not in line with the centre or regional party committee," it added, citing infringements over issues of principle such as opposition to separatism, "violent terrorism" and religious extremism, but did not elaborate.

The party bars overt dissent by members on key policies such as ethnic unity or religious extremism, maintaining a firm line that is never questioned by state media.

He has been expelled from the party and his case handed over to legal authorities, meaning he will be prosecuted, it added.

It was not possible to reach Zhao for comment and unclear if he has a lawyer. China...