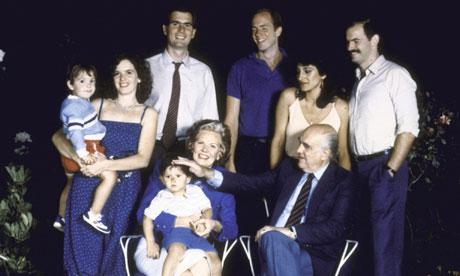 Former first lady Margaret Papandreou appears hellbent on revenge on the late Greek statesman Andreas Papapandreou, founder of the socialist PASOK party, in her tell-all autobiography titled “Love and Power” by Patakis Publications. In her book, she outlines her role in the life of the politician who served two terms as the prime minister of Greece (21 October 1981 to 2 July 1989; and 13 October 1993 to 22 January 1996), and who had been a dominent figure in Greek politics throughout his life.

She outlines how they met when she was a journalism student at the University of Minnesota and married her after getting a divorce from his first wife, Christina Rasia. They married in 1951 and had three sons and a daughter, but while still married to Margaret, he also had a daughter out of wedlock with Swedish actress and TV presenter Ragna Nyblom.

In excerpts published in weekly Greek newspaper Real News she revealed for the first time that she had an affair when she was 65 years old with a French man, Pierre, in an effort to take revenge on her husband’s own affair with air hostess Dimitra Liani. The former first lady states that she felt humiliated by Papandreou’s decision to leave her for a much younger woman during his political apex and so she met Pierre. She writes that he resembled “Kirk Douglas” and “Cary Grant”, however the only proof of his existence are her own words. She describes him as a high-ranking NATO official representing France.

For the first time, Margaret Papandreou reveals secret conversations with the late Andreas Papandreou. She states that just a few months after her husband met Liani, she was waiting for him to arrive at the home of the Greek Ambassador to London and asked for a room to be made up for him to relax. An hour later, a friend said, “He’s arrived with her!” She felt humiliated and angry and escaped from the ambassador’s residence the next day. “I told Andreas, ‘For God’s sake, Andreas, she could be your daughter!’ ‘Yes, isn’t that wonderful?'” was his reply.”

Andreas’ own contempt for his marriage and legal wife was total and absolutely cynical, something that deeply shattered Margaret more than the affaiir itself. She speaks of “poison arrows”.

The book also outlines the woman’s political campaigns e.g. the legalization of abortion that the socialist PASOK party did not want to openly support in the fear that it would alienate Christian voters. In 1985 she had asked for a personal meeting with Archbishop Seraphim in an effort to sway him.

The book contains a prologue by her son Nick Papandreou, an author himself.