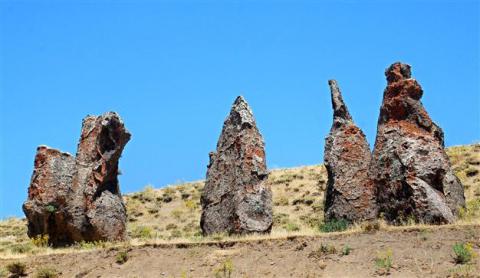 The rocks, called the 'Camels of Nemrut' as they resemble camels, are being worn down by time and damaged by people. AA photo

The Camels of Nemrut, rock formations created with the eruption of Mount Nemrut in Bitlis' Tatvan district, try to resist time and human damage Rock formations created by an eruption of the volcanic Mount Nemrut in the eastern province of Bitlis' Tatvan district are in danger of being destroyed. Located in Tatvan's Kar??yaka neighborhood, the rocks, which are called the "Camels of Nemrut" as they resemble camels, are being worn down by time and damaged by people because they are not protected effectively.

Bitlis Eren University history department member Associated Prof. Mehmet Demirta? said no preventive measures have been taken in the region, which is a protected area, and the rocks were being damaged every other day.

Demirta? said most of the rocks had been damaged by time and very urgent measures should be taken to arrest this damage.

"Those rocks were called the Camels of Nemrut," said Demirta?, adding that the stones had become strangely shaped after exposure to external factors such as rain for thousands of years.

He said the rocks looked similar to the formations in the Cappadocia region, and continued:

"Their shapes are similar to camels. They have been broken and eroded over time. The Camels of Nemrut were declared a first-degree protected area in 2010. Unfortunately, declaring a place a protected site is not enough for the protection of that place. There is not even a signboard to warn people in this area, which was called the 'Water of Camels' in the past. Some stones were broken even after it was declared a protected site. Excavation soil is discharged here. This is why the number of rocks decreases. Houses have also been built in this area. There are some 30 stones now in this protected area but...