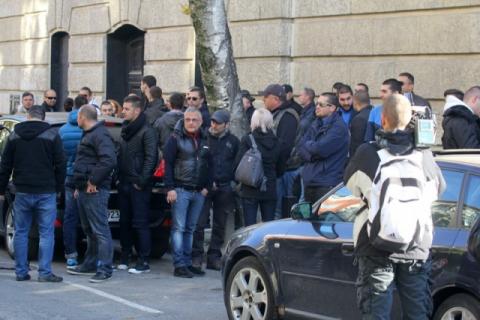 Protestes in front of the building of the Bulgarian Helsinki Committee. Photo: BGNES

A controversial nomination for the annual Human of the Year Award of the Bulgarian Helsinki Committee (BHC) has caused a major outcry in the country.

The reason for the discontent is the nomination of Australian citizen Jock Palfreeman, who is convicted of the murder of Bulgarian student Andrey Monov and is sentenced to twenty years in prison.

This resulted in a protest in front the building of BHC in Sofia on Thursday, in which relatives and friends of Monov expressed their discontent with the nomination.

The protesters identified the nomination as an insult to the memory of Monov, calling on BHC to withdraw it.

However BHC refused to withdraw the nomination, stating that there were no grounds for rejecting the inclusion of Palfreeman among the nominees.

In a statement issued on Wednesday, BHC explained that the nomination is fully compatible with the criteria and requirements.

According to BHC, the nomination is fully based on the deeds of Palfreeman as a human rights activist and has nothing to do with the crime for which he had been convicted.

The committee noted that nomination in no way minimises the death of Andrey Monov and the sorrow of his relatives and friends.

The argument in favour of his nomination is that Palfreeman actively participated in the establishment of the first and only registered organisation for prisoners in Bulgaria.

The annual Human of the Year Award is bestowed on people recognised for their contribution to the human rights field.