US operation targeting 'Jihadi John' based on Turkish intelligence 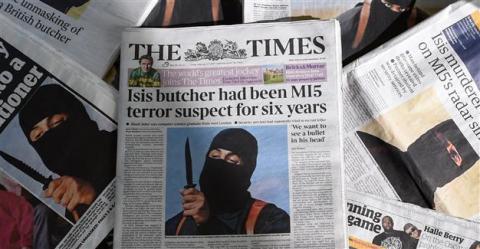 (FILES) - A file picture taken on February 27, 2015, shows an arrangement of British daily newspapers photographed in London showing the front-page headlines and stories regarding the identification of the masked ISIL militant dubbed "Jihadi John". AFP Photo

A joint operation by the United States and Britain targeted the British leader of the Islamic State of Iraq and the Levant (ISIL), "Jihadi John," was based on intelligence shared by Turkey's National Intelligence Organization (M?T).

Kuwaiti-born Briton Mohammed Emwazi, perceived as ISIL's "lead executioner," was "reasonably certainly" killed in a joint drone strike by the U.S. and Britain on Nov. 13.

Meanwhile, recent reports revealed that Turkey shared intelligence on the whereabouts of the militant in ISIL's capital, Raqqa, enabling the airstrikes that are believed to have been successful.

Tracking the woman down, MI-6 reported back to M?T, saying the messenger had connections with Emwazi, publicly known as Jihadi John.

Reports indicate Davis left Raqqa on Nov. 7 and crossed into the Ç?ld?roba village of Turkey's Syrian border town of Kilis. The jihadist moved to a cell house in Gaziantep the same day, where he stayed for two nights.

M?T secretly monitored the movements, meetings and connections of Davis throughout his time in Istanbul, until raiding a million-dollar ISIL cell house in Istanbul's Silivri district on Nov. 12.