Defense minister: "Vucic most in danger, army will protect him" 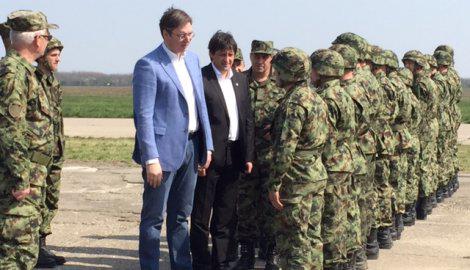 Defense minister: "Vucic most in danger, army will protect him"

According to estimates of security services Prime Minister Aleksandar Vucic is the person most in danger, and the army is "absolutely ready to protect him."

Defense Minister Bratislav Gasic made this statement on Monday, saying that the military was in charge of providing security to Vucic, and was "absolutely ready to respond to all threats and security risks, which may in any way endanger the prime minister."

Speaking about security risks, and recalling the murder of Prime Minister Zoran Djindjic, Gasic said that "the same actors are on the scene in Serbia even today."

- These are political-criminal-tycoon-media actors, and they were present when that unfortunate event occurred, too - said the minister.

He at the same time noted that "the subordination of all security services provides sufficient data that is dealt with daily by a specially set up staff in the Ministry of Defense," about which, he added, he "cannot give more details."

Dusan Masic: "Accused can defend themselves by lying"