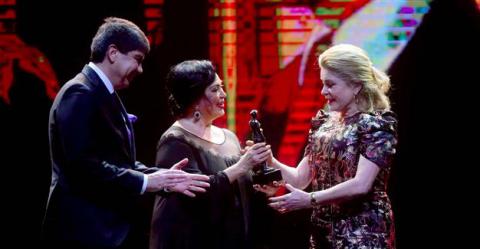 Turkish actors Tarik Ünlüo?lu, Gül?en Tuncer, Ipek Karap?nar and Begum Birgören, as well as British actor Jeremy Irons and American actress Kathleen Turner, were among those who participated in the festival's opening parade.

"Traditional film festivals are organized in various parts of Turkey. But Antalya is on the way to host one of the world's biggest film festivals. Our goal is no longer only to organize a film festival but to make Antalya one of the centers of the world's cinema industry. With this purpose, the festival has lots of renewals; the Film Forum, the Antalya Film Support Fund, the short film selections in the national and international competition categories, the documentaries selection, the midnight film screening for thrillers, mastermind classes, panels and a special screening of Y?lmaz Güney's film 'Umut' [Hope]. The Antalya Film Festival is very comprehensive for the first time," said Antalya Mayor Menderes Türel, the head of the festival.

Referring to former Diyarbak?r Bar Association head Tahir Elçi, who was killed on Nov. 28, Türel also noted such pleasing events as the festival were overshadowed by the death of peace ambassadors like Elçi as well as the drama of refugees escaping from war and poverty.

"We have pains everywhere from Paris to Ankara, from Diyarbak?r to Aleppo because of terror. Our only hope is telling people about love and humanity via art. This is why cinema and music needs the message of love, peace and humanity. We...