More than 5,000 liters of bootleg booze seized in Turkey's northwest 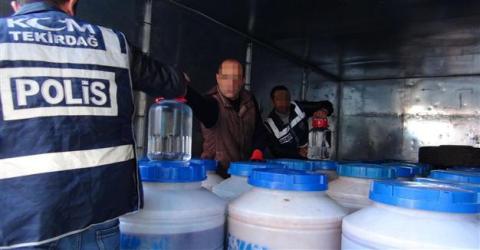 Thousands of liters of bootleg alcohol have been seized in a police raid of an illegal production facility in the northwestern province of Tekirda?, the state-run Anadolu Agency has reported.

Tekirda? Police Department Smuggling and Organized Crimes Unit officers seized 5,260 liters of bootleg booze bottled in plastic barrels and glass jars on Dec. 2 after they raided an illegal production facility in the Hürriyet neighborhood in Süleymanpa?a, a district in Tekirda?.

A suspect identified as M.U. was detained during the raid, but was later released. The suspect said in his testimony he had been producing the alcohol for his own use.

Turkish authorities have stepped up preemptive measures against bootleg alcohol poisoning, with police raids of bootleg production facilities as well as the arrests and detentions of suspects implicated in deaths related to bootleg alcohol.

In the Aegean province of ?zmir, the number of people who have died from bootleg alcohol poisoning has risen to eight, Do?an News Agency reported on Dec. 1.

A number of deaths have also occurred in Istanbul in recent months as a result of bootleg alcohol.
A friend of a bootleg rak? victim Ömer Akgün Yüngeli? said rising prices were encouraging bootleg alcohol consumption.

Mehmet Y?lmaz Durgun, Yüngeli?'s flat mate, said he would continue to drink illicit alcohol despite the risks, as he said he could not afford legally produced alcohol.