Putin used to call me brave and bold: Erdo?an 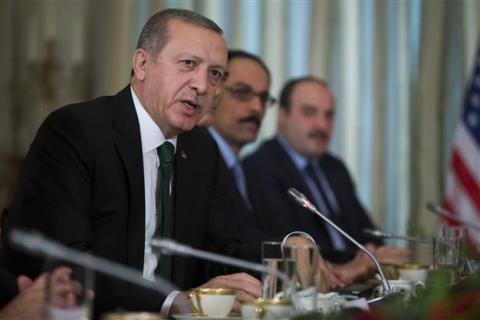 Turkish President Recep Tayyip Erdo?an speaks during a bilateral meeting with U.S. President Barack Obama, in Paris, on Tuesday, Dec. 1, 2015. The leaders discussed the continuing crisis in Syria, and the fight against the Islamic State of Iraq and the Levant (ISIL). AP Photo/Evan Vucci

Turkish President Recep Tayyip Erdo?an has said Russian President Vladimir Putin used to call him "brave and bold," before the two countries' relations soured over Turkey's downing of a Russian fighter jet near the Syrian border on Nov. 24.

"Putin's statements about me have always been about my bravery and boldness ... He also had many words on my honest statesmanship. When he meets with [former Italian Prime Minister Silvio] Berlusconi and [former German Chancellor Gerhard] Schröder, his words have always been in that direction," Erdo?an told reporters en route to Qatar after the U.N. Climate Change Conference in Paris.

He also stated that "all countries" acknowledged Turkey to be right over the downed jet incident.

"The dominant topic in bilateral talks was developments between Russia and Turkey. I held bilateral talks with [French President François] Hollande, [German Chancellor Angela] Merkel, and [Ukrainian President Petro] Poroschenko on the first day. I also had a bilateral conversation with [U.S. President Barack] Obama before leaving Paris. All four agree on Turkey's justification and the siding of NATO with Turkey over the incident. They said, 'We will continue to stand by you after this.' Mr. Obama's statement at the recent press conference was also very clear," Erdo?an said.

The Turkish president stressed that "problems should be solved diplomatically," while also touching on his previous claim that Turkey would have "taken a different approach if it had known the jet was Russian."