Frontex to Send More Guards to Greece's Border with Macedonia 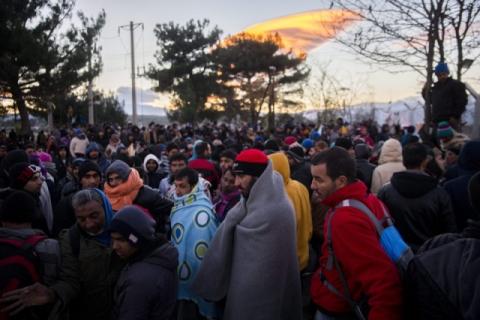 A picture made available on 03 December 2015 shows migrants prevented from entering Macedonia waiting on the Greek side of the border between Greece and Macedonia, near the Greek village of Idomeni, 02 December 2015. Photo EPA/BGNES

The EU border agency Frontex said on Thursday that it will deploy additional guards at Greece's border with Macedonia where migrants have been stranded for more than a week now.

The deployment of additional officers, who will assist with registration of migrants, will begin next week, Frontex said in a statement.

The decision was reached at the OSCE conference in Serbia's capital of Belgrade just a day before EU interior ministers meet in Brussels on Friday to review efforts to stem migration flows.

Macedonia's Foreign Minister Nikola Poposki welcomed the decision, saying it will help defuse tensions at his country's border with Greece.

Some 1,500 people, mostly from Pakistan, Iran and Morocco, have been stranded near the Greek border town of Idomeni for more than a week, demanding to cross into Macedonia en route to western and northern Europe.

Non-EU Macedonia has been allowing only people arriving from war zones such as Syria, Afghanistan and Iraq to cross at its Gevgelija checkpoint opposite Idomeni as those migrants are typically granted asylum in the EU. The Macedonian authorities consider people from other nationalities to be economic migrants and deny passage to them.

"It is crucial that all migrants entering the European Union are properly registered. Migrants at Greece's northern border will be checked and those found not properly identified will be registered," Frontex Executive Director Fabrice Leggeri said in the statement.

The strengthening of Frontex's existing operation on the Greek islands and assistance in the registration and fingerprinting of migrants at Greece's land borders were among the conclusions of the October summit of leaders of the countries lying on the so-called Western Balkans route used by...

European watchdog could decide on AstraZeneca vaccine by end-Jan