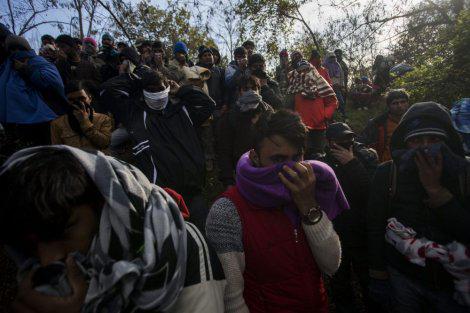 One man died of electrocution while two others were injured on the Greece-Macedonia border as migrants and refugees clashed there on Thursday.

Macedonian authorities are allowing only refugees from war-affected Syria, Afghanistan, and Iraq to enter the country, on their way to western and northern Europe.

The victim, believed to be a Moroccan citizens, died when he climbed "onto a carriage of a stationary train near the border and touching a high-tension cable overhead," local police spokesman Petros Tanos has been quoted as telling AFP.

According to the agency, a group of Moroccan men then "advanced towards the border crossing with cries of 'Allahu akbar'," but were pushed back by Greek police who fired tear gas.

Migrants who are not allowed to enter Macedonia on Wednesday protested by blocking the road and preventing anyone from passing.

Groups of mostly Iranians and Pakistanis have been clashing with Afghans, throwing rocks at each other. This resulted in two men suffering head injuries.

Greek riot police have been deployed at the border and have formed cordons to protect refugees who are waiting to enter Macedonia in a field on the Greek side.

Macedonian police have been using tear gas to push back Pakistani, Moroccan, and Iranian demonstrators, who have used tools to cut through Macedonia's border fence.

More than 5,000 people of various nationalities are now located in the border area near Idomeni in Greece - a country "under European pressure to limit the inflow of migrants arriving to Greek islands from Turkey."