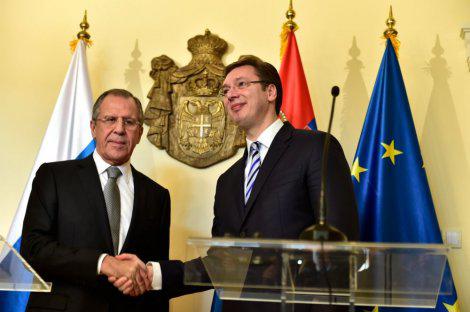 Russian Foreign Minister Sergei Lavrov says Russia is satisfied with the development of relations with Serbia, with whom it has an intense political dialogue.

The Russian foreign minister, who is in Belgrade for the OSCE Ministerial Council, spoke during a joint news conference with Serbian PM Aleksandar Vucic after their bilateral meeting on Friday.

The two officials announced that Russian Prime Minister Dmitry Medvedev will visit Serbia in the first half of 2016.

"We have always been allies in all wars and difficult situations, and we will remain allies," Lavrov said.

According to the Russian minister, relations between Serbia and Russia are not burdened by "politicized considerations" nor by attempts to introduce restrictive measures - and this enables development of economic and trade cooperation.

He noted that Russian companies are interested in participating in privatizations in Serbia.

Vucic said he expects "many joint agreements and jobs" to be confirmed before Medvedev arrives here.

"We are a small country and we cannot help Russia as much as it can help us, but we feel that we are a fair partner - something we have demonstrated also by not stabbing Russia in the back during when it was going through difficult times," said Vucic, adding that believes that "people in Russia respect that."

Lavrov said that relations between the two countries are characterized by closeness, solidarity, and centuries-long cooperation.

Lavrov noted that Vucic visited his country in October while Medvedev's visit to Serbia will come early next year.

"Such intense dialogue and...