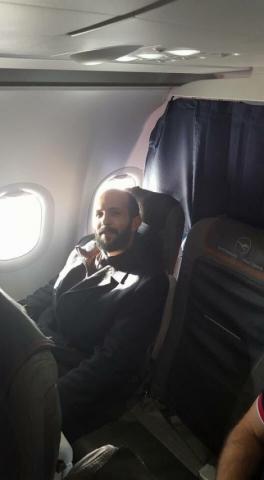 A Jordanian citizen with an American passport tried to break into the cockpit of Lufthansa aeroplane, heading to Belgrade from Frankfurt, but the passengers managed to fight him down.

The drama started 11.000 meters above Austria, when the troublesome Jordanian started threating he will opet the door.

Reasonable passengers prevented him from doing that, so the aeroplane landed safely in Belgrade at 45 minutes past noon. The aeroplane crew didn't report the emergency situation to flight control.

Right after the landing, Serbian police entered the plane and threw the Jordanian out, sending him immediately to the Belgrade police department, where he is currently being questioned by the police.

The president of Vojvodina Handball Club Milan Djukic, who happened to be on the same flight where the incident took place, said that the passenger looked suspicious even during the boarding.

- Somewhere in the middle of the flight, he tried to open the cockpit door, but the crew prevented him from doing so - Djukic said.

According to him, Vojvodina assistant coach Milan Mirkovic and handball player Aleksej Rastvorcev fought the Jordanian down. Other passenders had no idea what was going on.

Djukic also said that the passenger was moved to business class after the incident, where he remained calm until the end of the flight. Mirkovic and Rastvorcev were keeping an eye on him the whole time.