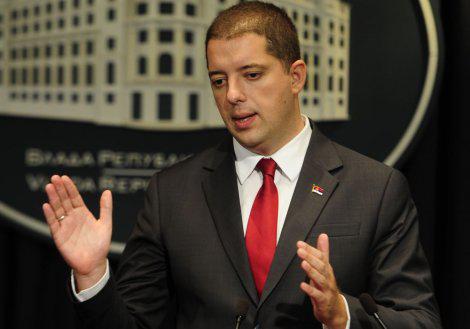 Marko Djuric was in Gorazdevac on Monday when he said Kosovo Albanian politicians are personally responsible for the safety of Serbs in this enclave.

The Serbian government Office for Kosovo director's trip and comments came after a series of incidents in Gorazdevac on Monday, which he earlier in the day characterized as "Albanian terrorism."

Djuric visited a damaged memorial in the village's center - raised to honor the victims of the NATO's 1999 bombing, and the Serb children gunned down in Gorazdevac - to reiterate that the latest attacks were terrorist in nature, just as was a recent incident in a village near Vucitrn when a hand grenade was thrown at a store but failed to detonate.

According to him, it was the political climate created in Kosovo that had led to the attack in Gorazdevac, followed by a blackout in the village and its wider area, and then the entry of "an organized terrorist gang."

"The attack on the Serbs in Gorazdevac was not just an attack on them, behind these people are millions of Serbs throughout Serbia and whoever touches the Serbs in Gorazdevac makes a terrible injustice not only toward the dead to which the desecrated monument was dedicated and toward the children, but is making an act of aggression against the whole Serbian nation," he said.

Bulgaria to EU Council: National Assembly Resolution on Republic of North Macedonia Is in Effect