Dimitra Liani’s book on everyone and everything: Papandreou family under fire! 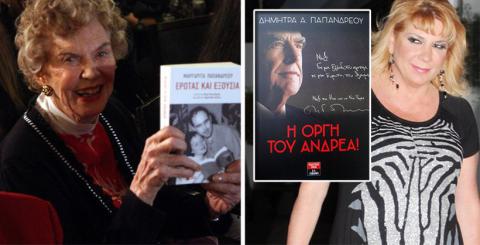 Former air stewardess mistress and wife of the late Greek statesman Andreas Papandreou’s new book “Andreas’ rage” (I Orgi tou Andrea) comes in response to a book written by his wife Margaret Papandreou that was published amid a great deal of hooplah last month. There are no end of complaints and “digs” against the Papandreou family with comments against his daughter Sophia and ex-wife Margaret. Specifically, Liani reveals that the late statesman’s ex-wife had an affair when the two were still married beginning in 1987.

A portion of the book is solely dedicated to Margaret where she writes: “At a time when we were rocked by what was dubbed the ‘dirty ’89’, Mrs. Margaret had already had an affair in the United States in 1987! They walked around hand-in-hand. Her right. She chose Paul Olum, a lecturer from Oregon and widower. She made him consent to a prenuptial deal where, as she says, if he were to die she would get his pension benefits worth 8,000 dollars per month. However, this met with the opposition of her children. Mr. Olum, at some point, offered 11,000 dollars per month to the organization known as Women for Mutual Security. Unfortunately, the lecturer had Alzheimer’s and even though she unsuccessfully tried to keep him at a home here, he died early… I won’t make an effort to comment on the work or days of Mrs. Margaret. I won’t stoop to that level with even one step. When I entered the life of Andreas it was with his consent as the couple was already a conventional one and Andreas ‘gone’ for a long time, and many years earlier. I didn’t separate them as they were already esentially living different lives. Everybody knew this and confirmed this.”

Another part of the book claims that she believes that she is the only Papandreou who never used the surname to her advantage in public life or to get special treatment from the system.

The book does not touch on the persoal moments that she enjoyed with Andreas Papandreo but also following his death. She makes it clear that this is not her intent as that would be another book altogether.

She targets Sophia, Andreas Papandreou’s daughter, by stating that her father was upset that she took his files and medals of honor from his home. She is also critical of her decision to rent off a portion of the house to the son of the former king of Greece. “Sophia, in the summer of 2013, decided to rent a part of the historic Kastri home to the son of the former king, Constantine Nikolaos. In this way she gave forgiveness to Konstantinos who had in July 1965 sacked her grandfather as prime minister.”

The book is bitter regarding the treatment she received following her husband’s death. “Few people cared about me. Those who had been near for a share of power were especially flashy in their show of indifference. The others, the more respectable, kept up appearances. Still, they didn’t care what happened to me, but at least they did not speak ill of me,” she said.

Speaking of former prime minister George Papandreou, she speaks of incompetence, whereas she describes the current leader of the socialist PASOK party Fofi Gennimata as a marionette.