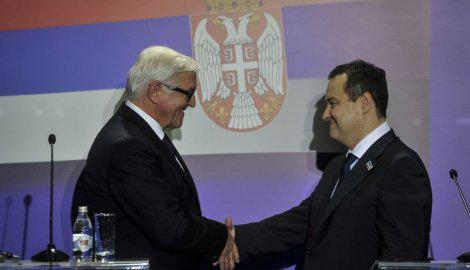 Ivica Dacic described Monday's opening of the first chapters in Serbia's accession negotiations as a historic day for the country.

As the foreign ministry stated, he said this indicates that Serbia is unstoppably on the road toward the EU, striving for a society founded on European values.

"Serbia is ready for the opening of chapters, wishing openly to complete the negotiation process by 2019 despite all the difficulties that we may face, so that we could apply for membership in 2020, and thus not wait for the next budget cycle for seven years," the Serbian foreign minister and first deputy prime minister underscored, noting that the first big step has been made.

"Time has shown that the government, led by Prime Minister Aleksandar Vucic, is ready and capable of such historic steps forward," the ministry quoted Dacic as saying.

Serbia is absolutely ready to open chapters in its entry negotiations with the European Union, said Aleksandar Vucic.

Noting that a big and important event lies ahead of Serbia on Monday, Vucic underscored that the opening of chapters sets Serbia on an irreversible path toward the bloc.

As for Chapter 35, the prime minister said this chapter is very difficult and will remain open until the end of Serbia's EU accession...