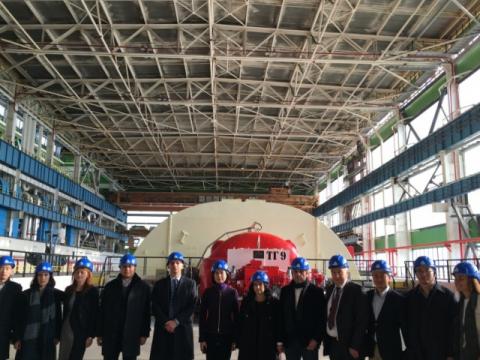 Bulgaria has presented to a potential Chinese investor the opportunities for possible cooperation in the construction of a new unit at Kozloduy nuclear power plant, the Energy Ministry in Sofia said on Tuesday.

Bulgarian Deputy Prime Minister in charge of EU funds absorption Tomislav Donchev and Energy Minister Temenuzhka Petkova presented "opportunities for future cooperation in the field of nuclear energy and the construction of a new unit, in particular" to the delegation.

The visit comes less than a month after Bulgarian Prime Minister Boyko Borisov invited China to join as financial investor a project of U.S.-based Westinghouse Electric for the construction of Unit 7 in Kozloduy.

During a visit to Beijing in late November, Borisov proposed that an unnamed Chinese company joined the project as financial investor with a 49% share. The idea had come from Westinghouse officials whom Borissov had met in Sofia before his China trip, he said at the time.

In Kozloduy, the Bulgarian hosts cited the availability of energy and transport infrastructure, experienced staff and the power plant's links with the energy systems of Bulgaria and neighbouring countries as favourable conditions for the construction of a new unit.

A joint working group will discuss details of potential cooperation in implementing the project, according to the statement.

Kozloduy generates more than a third of Bulgaria's electricity, the plant CEO Dimitar Angelov said at the meeting with the Chinese delegation. The two operating units had produced 14.5 million...