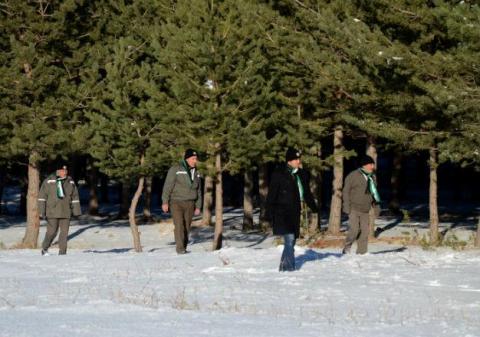 Turkish forest rangers in the eastern province of Kars are struggling to protect pines, especially saplings, from being cut for New Year's Day, officials have said.

Security measures in the Sar?kam?? district of the province have been tightened, said the local head of the forestry department, Halil ?brahim Ç?ng?.

The area, also a famous ski destination, is covered with scotch pines.

Decorating houses with artificial or real pines on New Year's Day, rather than Christmas, is popular in Turkey.

"We are trying to prevent tree-cuttings inside the forests and on the roadsides," Ç?ng? said.

"Citizens who need saplings do not have to cut trees," he said, adding that the office was providing free pine saplings.

Hoteliers and other tourism facilities were demanding saplings, the official said, recalling that illegal tree cutters are being fined and may be sentenced to up to one year in jail.

In Photos: US defense chief visits ?ncirlik base as part of tour to boost regional support against ISIL

In photos: Turkey commemorates Rumi with 'Night of Union' ceremony in Konya