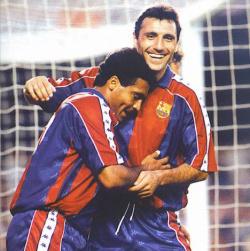 One of the greatest Brazilian players Romario confirmed his participation in the show celebrating the 50th anniversary of Bulgarian football legend Hristo Stoichkov this year.

Thus the legendary Bulgarian-Brazilian attacking tandem of Barcelona from the 1990s will reunite at the show, which is scheduled to take place at the Vasil Levski National Stadium in the Bulgarian capital of Sofia on May 20.

The show, which is entitled "50 years number 8" (after Stoichkov's jersey number) will bring together some of the greatest Bulgarian and international football players from the recent past and the present.

The participants will be split into two teams depending on whether they rely on their left foot or play with their right foot.

So far, a total of nineteen Bulgarian and international players have confirmed their participation in the show.

Five Bulgarian players have also confirmed their participation in the show, all of them part of Bulgaria's golden football generation of the 1990s, who together with Stoichkov finished fourth at the 1994 World Cup.

Tickets for the show are available for purchase in the network of Eventim (online at eventim.bg), with the prices ranging from BGN 18.88 to BGN 88.88 depending on the seating arrangement.