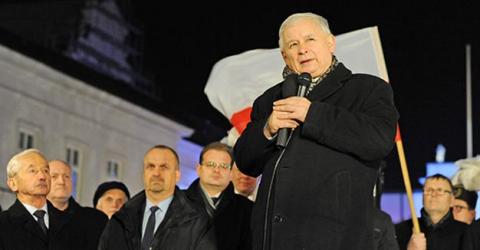 In this file photo, Jaroslaw Kaczynski, right, the late president Lech Kaczynski's twin brother and leader of the now-ruling party Law and Justice, speaks during remembrance ceremonies in front of the Presidential Palace in Warsaw, Poland, Thursday, Dec. 10, 2015.

The European Commission decided Jan. 13 to open a case against Poland over new constitutional court and media legislation that have been criticized as running counter to the bloc's fundamental principles about the rule of law.

European Union Vice-President and Commissioner Frans Timmermans said his executive will carry out a preliminary assessment of this matter - the first step in a drawn-out procedure that could ultimately lead to suspending Polish voting rights in the 28-nation bloc.

Poland government spokesman Rafal Bochenek played down the decision, saying it was a standard procedure that did not influence Poland's relations with the European Commission. Bochenek said Timmermans has already been invited to Warsaw for talks on the Polish laws.

In December, Poland's ruling Law and Justice Party, which has a full parliamentary majority, took steps to gain influence in the constitutional tribunal, which is supposed to be an independent arbiter with the power to block the government's legislation.

In addition, Poland's president signed a law last week that heads toward giving the government full control of state radio and television, a move critics also see as undermining a cornerstone of democracy.

Even before the Jan. 13 announcement, the Polish government has criticized the EU and some of its leaders for meddling into its internal affairs.

The EU has had similar problems with Hungary, and Prime Minister Viktor Orban has already stressed his support for Poland.

So far, the EU has never had to move toward suspending the voting rights of a member state.

Poland is confused by remarks of Timmermans about launching the rule of law procedure and is waiting to receive the decision in writing, Polish...

Turkey's GDP per capita index up in 2020

Central government gross debt stock at $233.5 bln in May

US to seek extradition of Turkish businessman over money laundering charges