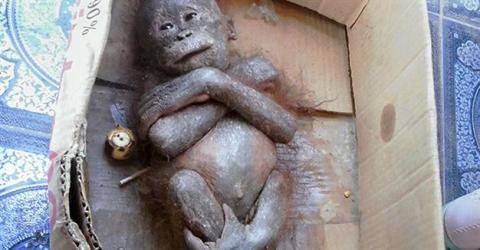 This handout photograph taken on August 16, 2015 and released on January 14, 2016 by International Animal Rescue shows a baby orangutan named Gito inside a box following his rescue, after being dumped under the baking sun in West Kalimantan on the Indonesian part of Borneo island, with rescuers initially believing the ape was dead due to his "mummified" appearance. AFP Photo

A baby orangutan found abandoned and almost dead has made a swift recovery at an Indonesian rescue center, and has been filmed playing happily with another young ape.

Gito was discovered dumped in a cardboard box in August under the baking sun on the Indonesian part of Borneo island, with rescuers initially believing the primate was dead due to his "mummified" appearance.

A team from International Animal Rescue (IAR) picked up the endangered Bornean orangutan and rushed him to their center.

Gito, who is less than a year old, was suffering from multiple ailments but has recovered strongly, and was recently released from quarantine and introduced to another male baby orangutan, Asoka, also rescued on Borneo several months ago abandoned in the jungle.

Biologists Have Discovered the Largest "Monster Flower" in Indonesia

A Five-Story Building Partially Collapsed in Jakarta, at leat Eight People are Injured

What are the Three Most Polluted Places on the Planet?

Turkey ‘has potential to attract over 75 mln tourists’

Over 39,000 flee northwest Syria as Assad pushes closer to Idlib

Work to start in May on Turkey's first domestic car plant