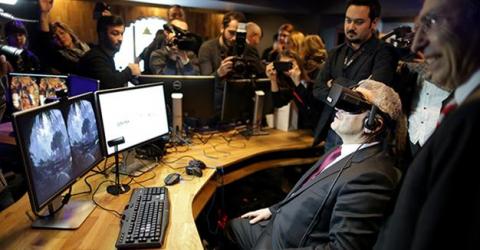 A virtual reality (VR) laboratory has been opened in Istanbul by Germany-based independent video game developer, publisher and technology provider Crytek in cooperation with Bahçe?ehir University (BAU). Being a part of Crytek's Virtual First Program, the center will serve as a technology base for VR developers and entrepreneurs with innovative ideas, according to a written statement by the university on Jan. 19.

The global launch of the program was also made in Istanbul, said the statement.

The center aimed to gather young developers and entrepreneurs who hope to realize their innovative ideas through VR technology, which is expected to reach a market value of $30 billion by 2020, according to the statement. The center will act as a pilot destination for the scheme.

"We are happy to take the first step of our VR First Program along with the Bahçe?ehir University. Through such partnerships both in Turkey and in other countries, we seek to create awareness and offer professional equipment to VR developers by unleashing the potential of VR technology," said Crytek founding partner and CEO Cevat Yerli.

In the center, which is located in BAU's Galata campus, developers will be able to work on projects by using CRYENGINE technology with the support of big firms such as AMD, Logitech and MSI, said the statement.