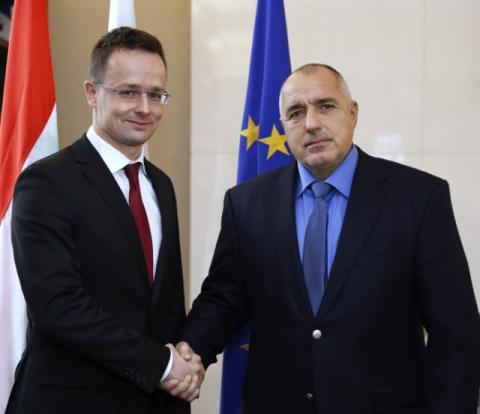 Trade, economic and investment cooperation has been in the focus of talks between Bulgarian Prime Minister Boyko Borisov and Hungarian Minister of Foreign Affairs and Trade Péter Szijjártó in Sofia on Thursday.

Borisov highlighted Bulgaria's proposal for the construction of a distribution centre for transit of natural gas to southeastern and central Europe, the government press office said in a statement.

Bulgaria's plans to build interconnectors with its neighbours to facilitate two-way transportation of gas were also on the agenda of the meeting.

Péter Szijjártó said that from a Hungarian perspective it was unfortunate that the South Stream gas pipeline project was no longer on the agenda, according to hungarytoday.hu.

However, the Hungarian government welcomed the European Commission's decision to provide almost EUR 180 M for studies and work relating to the construction of gas interconnections between Bulgaria, Romania, Hungary and Austria which would link the Southern Gas Corridor with the gas system of Central Europe, Szijjártó said.

The expansion of economic links between Bulgaria and Hungary is of interest to both countries, Borisov said. He also welcomed Hungary's plans to restore the direct air link between Budapest and Sofia, the government's press office said.

Szijjártó elaborated that if a public procurement tender planned by the Hungarian government is successful, a direct air route Budapest-Sofia could be launched in early 2017, according to hungarytoday.hu.

Bulgaria and Hungary will create a joint intergovernmental commission on economic cooperation under an agreement reached at a meeting between Economy Minister Bozhidar Lukarski and Péter Szijjártó in Sofia on Thursday.

The agreement should be...