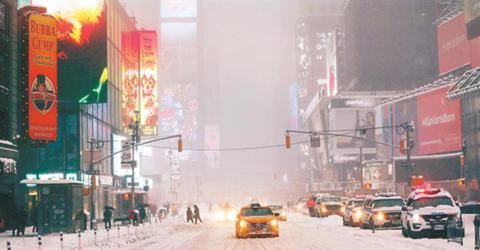 A general View of Times Square while snow falls on January 23, 2016 in New York. A deadly blizzard with bone-chilling winds and potentially record-breaking snowfall slammed the eastern US on January 23, as officials urged millions in the storm's path to seek shelter -- warning the worst is yet to come. US news reports said at least eight people had died by late Friday from causes related to the monster snowstorm, which is expected to last until early Sunday. / AFP / KENA BETANCUR

Millions of residents, business owners and workers began digging out on Jan. 24 from a massive blizzard that brought Washington, New York and other northeastern U.S. cities to a standstill, killing at least 19 people in several states.

On the New Jersey shore, a region hard-hit in 2012 by Superstorm Sandy, the storm drove flooding high tides.

After dumping about two feet of snow on the Washington area, the storm unexpectedly strengthened as it spun northward and slammed into the New York metropolitan area on Jan. 23, home to about 20 million people.

New York Governor Andrew Cuomo declared a state of emergency, as did 10 other governors. A ban imposed on all travel on New York City area roads and on Long Island, except for emergency vehicles, was on Jan. 24.  Bridges and tunnels into the city were also set to reopen.

Subways running above ground and trains operated by the Long Island Rail Road and Metro-North halted service on Jan. 23 and were to be evaluated for service restoration.

By early Jan. 24 the storm had all but moved off the coastline, with remnants trailing over parts of Long Island and Cape Cod.

Given the massive storm's impact, it...