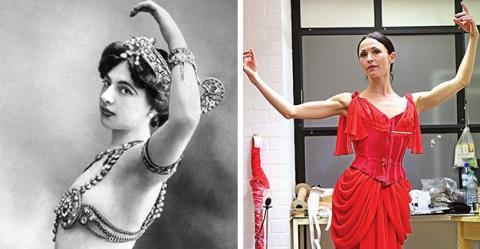 The Dutch National Ballet will bring to life through dance Mata Hari, who has becomesynonymous with unbridled sensuality and ultimately, fatal betrayalNearly a century after she was shot as an alleged spy, the story of the world's ultimate femme fatale, Mata Hari, is to be staged for the first time as a ballet in her native Netherlands.

"Mata Hari" will open to an already sold-out premiere at the Dutch National Ballet in Amsterdam on Feb. 6, aiming to bring to life through dance the woman whose name has become synonymous with unbridled sensuality and ultimately, fatal betrayal.

Frisian-born Margaretha Geertruida Zelle, known by her stage name Mata Hari, was executed by a French firing squad on Oct. 15, 1917 after being accused of spying for Germany during World War I. She was just 41.

In the years before the war, her daring exotic striptease act had brought her notoriety, fame and adoration and she's widely regarded as one of the world's first-ever exotic dancers.

Her Oriental "sacred dances" act in pre-war Parisian halls pushed the boundaries of the buttoned-down mores of the late Victorian era and often saw her stripping to little more than a bejewelled brassiere and a silk veil -- making her an overnight sensation in the French capital and elsewhere in Europe.

Now her story is being told "en pointe" for the first time.

"I wanted to make a dramatic ballet... and I was looking for a subject matter to create dance, so there had to be a connection with dance," said Ted Brandsen, Dutch National Ballet director and the show's choreographer.

"Mata Hari was a person who always fascinated me and she was Dutch. A lot of people actually don't know that," Brandsen said.

The idea of creating a...