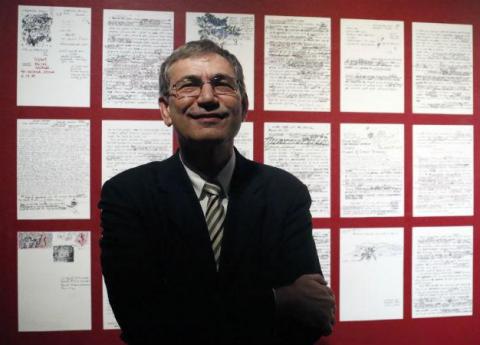 Nobel laureate Orhan Pamuk has said that recent investigations and detentions of academics who signed a petition calling for an end to security operations in the country's southeast did not suit Turkey, urging for a moderation.

"Twisting their arms, calling them traitors and pledging payback does not suit Turkey and the wealth that Turkey comes from," Pamuk said during a TV program on CNN Türk on Feb. 2, adding no one would benefit from those incidents.

Pamuk called the petition "faulty" but said its general philosophy was "peace and goodness."

"I am against those austerities. Let us soften a little bit. There is an austerity coming from the top of the state," Pamuk said, calling for moderation.

Recently, an academic from Atatürk University in the eastern province of Erzurum who was released with an international ban after detainment, was dismissed from his post on Feb. 3.

Academic Ramazan Kurt, who worked in the department of he philosophy and history of philosophy, was detained at his house on Jan. 14 and accused of "terror propaganda," "incitement to hatred or defaming people" and "defaming the state's judicial bodies."

After the court's decision of rejection of venue, the investigation file was sent to Istanbul Chief Public Prosecutor's Office.

Universities and prosecutor's offices across Turkey have launched investigations into many of the 1,128 local and...