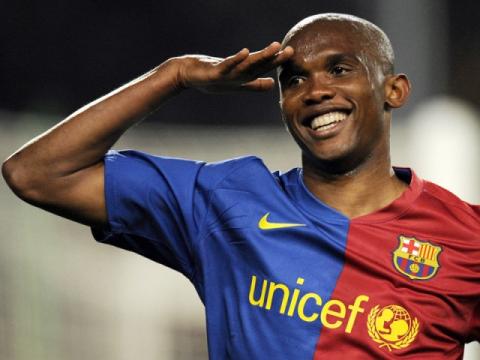 Cameroonian striker Samuel Eto'o is the latest player to confirm his participation at the birthday show celebrating the 50th anniversary of Bulgarian football legend Hristo Stoichkov.

Eto'o, who like Stoichkov played for Barcelona, is the first African to confirm his participation in the spectacle which will take place at the Vasil Levski National Stadium in Sofia on May 20.

The show entitled "50 years number 8" (after Stoichkov's jersey number) will bring together some of the best Bulgarian and international football players from the recent past and the present.

So far, a total of five Bulgarian and 22 international football players have confirmed their participation in the show.

The first to confirm was Argentinian legend Diego Maradona, followed by numerous stars from Europe, the Balkans and Latin America.

The Balkans will be represented by Romanians Gheorghe Hagi and Gheorghe Popescu, Croatians Davor Suker and Zvonimir Boban as well as Predrag Mijatovic and Dejan Savicevic from Montenegro.