Rare board game for Hitler Youth goes up for auction 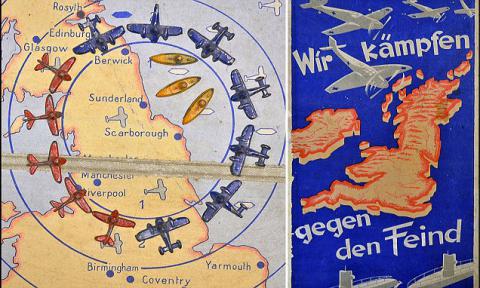 A rare German board game which the objective was to invade Britain is to be put up for auction in UK.

The game entitled Wir Kampfen gegen den Feind (We fight against the enemy) is believed to have been produced in the early 40s and designed to encourage children in Nazi Germany to work together to ensure success.

This propaganda tool sees die-cast pieces of U-Boats, fighter planes and bomber aircraft to attack the UK in an offensive centered on Scarborough in Yorkshire, as Daily Mail writes.

The game played with the three players and appeared to have had a clear winner from the beginning since, it was impossible for Germany to lose as Britain was not offered any defense.

The board game has been valued at £300, and will go under the hammer next month, after being put up for sale by a German collector.

Ben Jones, of Mullocks auctioneers of Ludlow, Shropshire, said: ‘This is pure propaganda and it was really designed to show that the Nazis were going to win the war – giving anyone who played it a false sense of victory.

‘It was meant to show the German people, especially children, that they can’t lose, they won’t lose and Britain will ultimately fall.

‘They wanted to make people believe it was easy to defeat Britain and if the Germans clubbed together that it was just a matter of time.’