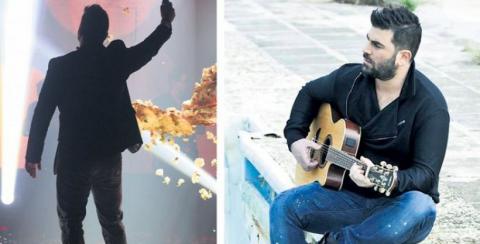 Pantelis Pantelidis was born in 1983 in Athens and grew up in Nea Ionia, where he used to work in the family business to help his parents, even after he became a successful singer.

Pantelidis became famous when he started posting his songs on Youtube stealing the hearts of many fans, who were watching him playing his guitar at home and singing his songs, rather than being promoted by big record companies.

When he signed his first contract, he had already his own fans who loved him and everyone started talking about “Pantelidis-phenomenon”.

His talent soon became recognized and Pantelidis started performing in Greece’s biggest nightclubs along with the biggest stars of Greek music industry.

His first album “Alchoolikes Oi Nyxtes” came out in 2012 and became twice platinum.

According to Pantelidis, his songs were talking about personal experiences or stories of his friends and most of the songs became hits.

His colleagues were talking about a brilliant singer with a down-to-earth personality who had only good words to say for everyone. And his fans also loved him for that, his simplicity and kindness.

The last day of his short life Pantelidis was anxious about his premiere and was rehearsing at the nightclub scheduled to open the next day of his tragic accident.

When he finished the rehearsal, he left the nightclub with a colleague and went to a bar to meet two of his friends, Mina Arnaouti, 29, and Froso Kyriakou, 21. Then, they all left and went to another club at Glyfada where they stayed for a couple hours. Afterwards, they decided to go to a friend’s place where they played poker until early in the morning.

It is said that Pantelidis was very sad because of the reactions caused a few days ago and concerned a song he wrote which was mentioning Cyprus and occupied Cyprus. Due to the reactions, he decided to withdraw the song, because he was very sad, as he said to his friends on social media.

Pantelidis and his two friends left the house early in the morning on Thursday and got in the car. In a sharp turn, the 32-year-old lost control of the car and crashed onto the barriers. He died almost instantly, while the two women were injured, one seriously.

It is still hard for everyone to believe that this brilliant and modest young singer, ‘Pantelis-phenomenon’, has lost his life.

His family and colleagues and thousands of friends and fans said goodbye to him on Saturday paying their tribute in his funeral, while many people had gathered on Saturday night at the scene of the accident to lit a candle in his memory.