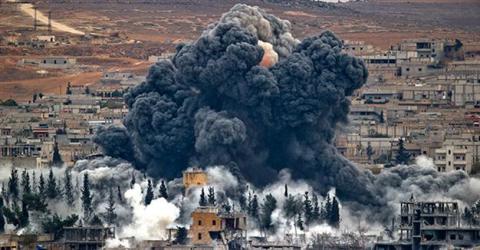 In this July 30, 1991 file photo, smoke rises from the Syrian city of Kobani, following an airstrike by the US led coalition, seen from a hilltop outside Suruç, on the Turkey-Syria border. AP Photo

War crimes are "rampant" in Syria, and the conflict has become "a multisided proxy war steered from abroad by an intricate network of alliances," U.N. investigators said in a new report Feb. 22.

In a swipe at the U.S., Russia and their allies, the Independent International Commission of Inquiry on Syria said the international powers and regional countries ostensibly pushing for a peaceful solution are the same nations that "continue to feed the military escalation."

The new report came as U.S. officials said the U.S. and Russia had agreed on a new "cessation of hostilities" in Syria that will take effect on Feb. 27.

Paulo Sergio Pinheiro, chair of the commission established by the U.N. Human Rights Council, enthusiastically welcomed efforts launched in Vienna and Munich to find a political solution to the conflict, which will enter its sixth year in March with over 250,000 people killed.

The U.N. investigators warned that "the fractured Syrian state is on the brink of collapse" and said there is a growing risk of "internationalization of the conflict."

Crimes against humanity continue to be committed by government forces and the Islamic State of Iraq and the Levant (ISIL), their report said.

"The fight for control of areas in the hands of enemy forces is carried out with blatant disregard for human life and the laws of war," Pinheiro told a news conference launching the report. "Not a single warring party respects international humanitarian law, the Geneva conventions, all the conventions of human rights."

The investigators urged the U.N. Security Council to take action to bring the perpetrators to justice, possibly by referring the situation in Syria to the International Criminal Court or to "an ad hoc...