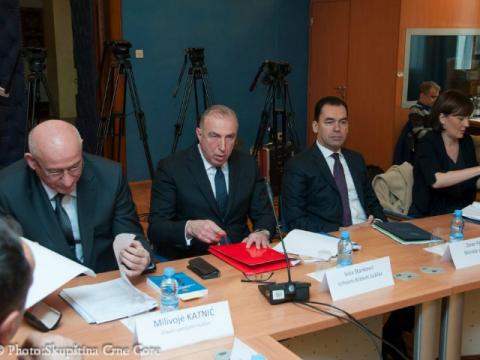 The Montenegrin police accused the Special Prosecutor's Office of the illegal arrests of several senior police officers on Sunday on suspicion of involvement in organized crime and demanded protection from Prime Minister Milo Djukanovic.

In a statement late on Sunday, the Police Directorate complained of a "constant atmosphere of distrust" created by the prosecution.

"We urge the authorities and the government to provide legal protection to police officers according to their competencies," police said.

The statement came after the head of the police department for the prevention of organized crime and corruption, Dalibor Medojevic, and one of its inspectors, Nikola Terzic, were arrested on Sunday.

They were held on suspicion of having been part of what the prosecution called an "organized criminal group" responsible for the disappearance of crucial evidence in a case against Montenegrin businessman Veselin Mujovic.

Mujovic is accused of having taken a 800,000 euro bribe from the former president of the former state of Serbia and Montenegro, Svetozar Marovic, promising him more favourable treatment in several corruption cases in which he is the prime suspect.

Marovic was arrested in December in connection to a long-running corruption case centring on his hometown of Budva, on suspicion of costing the local budget 120 million euros.

The missing evidence relate to 13 letters that Mujovic sent to top state officials, including PM Djukanovic, which were taken from his home during a police search two weeks ago.

A few days later, the prosecution revealed the letters were not submit by the police along with other evidence.

The arrested police officers Medojevic and Terzic were responsible for collecting and preserving...