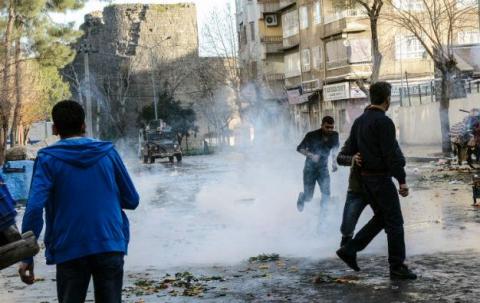 A call for a march in protest against the blanket curfew in the Sur district of the southeastern city of Diyarbak?r did not draw a notable reaction on March 2, with only a small group of youngsters staging a demonstration that was later subjected to a police crackdown.

"We do not want any fights or street protests," said a store owner living in Sur following a call from Selahattin Demirta?, the leader of the Kurdish-issue focused Peoples' Democratic Party (HDP), and several other lawmakers made a few days ago for a march toward Sur.

A group faced a police barricade when they attempted to stage a march toward the historic compound surrounding the old city of Sur late March 2, with the police detaining 33 people over the incident after dispersing the group, firing tear gas and water cannon.

Daily Hürriyet reported on March 3 that residents of Sur are unhappy and worried about the ongoing environment of violence as clashes between Turkish security forces and militants from the outlawed Kurdistan Workers' Party (PKK) continue to halt the day-to-day lives of residents, business owners and local administrators in the southeastern town.

"I'd rather be memorialized having a short lifetime with honor instead of being remembered as a politician who keeps quiet while people are dying," Demirta? said amid the march.

A protesting group gathered on the Ali Emiri Street of Sur's Da?kap? neighborhood, but faced a large police barricade when they attempted to reach the old city of Sur, chanting slogans starting with "biji," which means "live long" in Kurdish.

After dispersing a few dozen youngsters over a short period of time, police detained 33 of them over the incident and seized 35 improvised explosive devices (IED), 25...