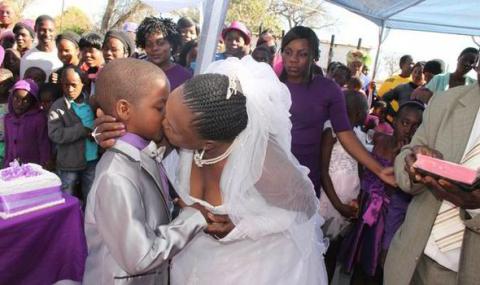 There are number of diverse cultural practices around the world when it comes to marriage. We just listed some of the most bizarre, at least to a westerner’s eye, form around the globe:

1. East Africa
In some East African tribes girls stitch everything but a small opening to urinate. This is to prevent sex before marriage!

2. Brazil
Brazilian men compete between each other to sway women to have sex with them by offering them gifts. (Not that different to our western culture….some would say)

3. Ghana
In this east african state, a widow has to spend a night with a complete stranger in order to cleanse the spirit of her deceased husband!

4. New Guinea
A tribe in New Guinea allows children to have sex at the age of 6 to 8, while the age of boys is determined between 10 to 12. They can have sex before marriage, but are not allowed to eat together before the tie the knot!

5. Cook Islands
In Mangala (Cook Islands) boys have sex at the age of 13 with elder women so that they can be taught the act of sex. These women teach the younger boys how to pleasure their female partners by prolonging the sexual act. Who said only the US had Mrs. Robinsons….

6. Cambodia
In Cambodia, special shelters are built for teenager girls to have sex. They spend the night with different guys until they find a suitable partner. Divorce is ILLEGAL!

7. Sambian Tribe
Young men in the Sambian tribe of New Guinea are kept away from women. They have to swallow the semen of the tribe’s mightiest warriors. This practice is considered a vital part of their initiation into manhood!