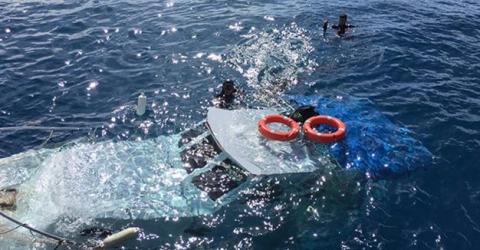 The number of migrants who drowned after a Greece-bound boat capsized off Turkey's Aegean coast on March 6 has risen to 25 and Turkish authorities have detained two human smugglers over the incident.

The incident occurred off the coastal town of Didim, a district in the Aegean province of Ayd?n, as the wooden boat carrying dozens of migrants capsized in the Aegean Sea while trying to cross from Turkey to Greece. The nationality of the migrants was not immediately known.

Fifteen migrants were rescued following the capsizing of the boat. Ten out of 25 dead were children.

Do?an News Agency reported that rescue efforts were undertaken by Greek and Turkish coastguards and aerial operations. Ambulances and medical staff were reported to be ready on the coast.

Turkish authorities detained one Turkish boat owner and one suspected people smuggler over the incident in Didim. Police are searching for three other suspects in connection with the tragedy, including two Afghans.

The detentions come on the same days as a crucial summit between Turkey and EU leaders in Brussels.

Geographically located between war-torn Syria and Iraq in the southeast and the EU member states of Bulgaria and Greece in the northwest, Turkey has become a transition point for migrants looking to cross into the EU, fleeing the violence in Iraq and Syria and seeking a higher standard of living.

The wave of migration across the Aegean Sea has often resulted in injuries and deaths due to either the capsizing of migrant-carrying boats or abuse of migrants by...