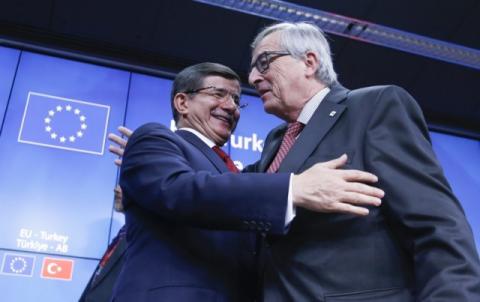 The leaders of the EU and Turkey will meet at an international summit in Brussels on Monday to discuss their cooperation in tackling the migrant crisis.

At the European Council of 18-19 February, the heads of state or government of the EU member states decided to hold a special meeting with Turkey in March.

The leaders are expected to reaffirm that their priority lies in the full and speedy implementation of the EU-Turkey action plan in stemming migration flows and countering human trafficking and smuggling networks.

In preparation for the summit, European Council President Donald Tusk traveled to the main countries of the Western Balkan migrant route between March 1 and 4.

In a telephone conversation with NATO Secretary-General Jens Stoltenberg, Tusk discussed the progress of the cooperation between the Alliance and the EU's external borders agency Frontex in the Aegean Sea.

Despite the good progress on some of the actions of the EU-Turkey action plan, the number of illegal entries from Turkey to Greece remains far too high.

Following a press conference with Davutoglu, the summit will resume with a working session between the leaders of the 28 member states.

The EU leaders are expected to agree on the full application of the Schengen Borders Code in order to close the Western Balkan migrant route and the reinforcement of the humanitarian assistance to refugees, particularly to Greece.

At the previous EU-Turkey summit in November last year, the Union committed itself to provide an initial EUR 3 B of additional resources to Ankara to help it deal with the high number of Syrian...