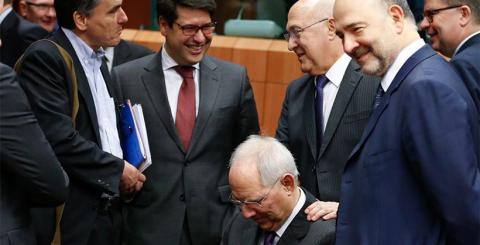 The head of the Eurogroup,  Jeroen Dijsselbloem told the press after the group’s meeting that the EU and IMF institutions would be returning to Athens, possible even tomorrow (Tuesday, March 7) to continue its work on the progress of the Greek program. He added that there were still fiscal ‘holes’ calling on the institutions and the Greek side to make every effort to cover the gaps. Dijsselbloem made it clear that any discussion regarding debt relief would be left for the future, under the condition that a primary surplus in the Greek budget had been achieved. Exiting the meeting Greek Finance Minister Euclid Tsakalotos confirmed the ‘Quartet’ institutions would soon be returning to Athens, despite the differences that arose. On the issue of the debt relief, European Commissioner for Economic and Finance Affairs Pierre Moscovici pointed out that talks on an alleviation of Greek debt could start within the immediate future. Finally, the head of the European Stability Klaus Regling stated that time and liquidity were running out, adding that the institutions’ revision of the Greek program depended on liquidity.

According to sources in the EU, the Eurogroup has given the ‘green light’ for the EU institutions plus the IMF, also known as the ‘Quartet’ to return to Athens as soon as possible in an effort to assess the progress of the implementation by the Greek government of the conditions tied with the EU bailout programme to the country. The EU institutions could land in Athens as soon as Tuesday, the same sources say, following the conclusion of the meeting of the Eurozone Finance Ministers on Monday. Head of the Eurogroup Jeroen Dijsselbloem is expected to release an official statement on the matter later Monday. The Dutch Finance Minister said Greece has to live up to its obligations signed in August. ‘…it is not only the position of the IMF, but also our own that reliable and viable reforms are necessary’, said Dijsselbloem arriving at the Eurogroup meeting, Monday. He stressed that if the August agreement is to be upheld the institutions must examine the amount of fiscal measures necessary and what form insurance reforms would take. Meanwhile, European Commissioner for Economic and Finance Affairs Pierre Moscovici said the EU must take into account the refugee crisis Greece is facing.