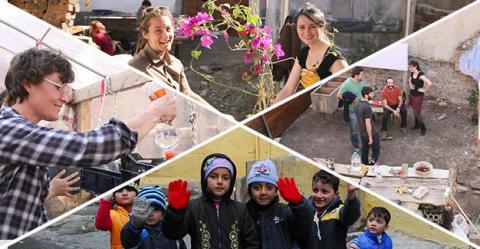 Volunteers in Turkey's ?zmir have opened the doors of their "leisure garden" to Syrian refugee children, in order to provide basic social needs for the traumatized children.

The Basmane district of ?zmir, an Aegean province, is known as a "hot spot" or transition point for refugees seeking to cross into Europe through the Aegean Sea illegally, despite risk of death.

The "Solidarity with Refugees Group" has turned the garden of its "Solidarity House" into a kid-friendly garden, where children facing poverty in the city can escape the memories of war by playing games, planting seeds and growing vegetables and fruits. One project done in the garden had the children bury toy guns in the ground as a sort of therapy.

Volunteers from Turkey as well as France, Brazil, Japan, American and Palestine will teach children refugees in Turkish, English and their mother tongue. These volunteers have been working with refugees in different countries before they came to Turkey.

"The only problem is not nutrition, sheltering and health services for refugees. We should reintroduce these children to the society and do something for their future" said the group's spokesperson, Yalç?n Yan?k.In Photos: Construction of Istanbul's third suspension bridge nears end In Photos: Two militants killed in operation after attack on Istanbul police stationIn Photos: Turkish police use tear gas, water cannon to disperse protestors in front of Zaman dailyHalfeti - A town of mesmerizing beautyExhibition shows Istanbul through eyes of children Secret weapons of Turkish army: locally produced rocket launchers, missile systemsThe bugs of Ankara: The weirdest scenes that anyone can run into in Turkish capitalA bird's eye view tour of Turkey's eastern provinces of Van and...