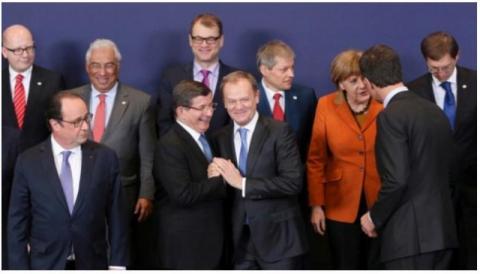 Brussels and Ankara on Tuesday agreed in principle to curb the migrant flow from Turkey into Europe, in return for additional aid to Turkey.

No final decision has been taken yet, and a new EU meeting will come up with a final position on March 17-18.

Under the agreement secured, Turkey will accept migrants returned from Europe and send a Syrian refugee from its camp in return for each one of them.

The introduction of a visa-free regime for Turkish citizens might be scheduled for this summer, a new demand from Turkey which had earlier suggested it should be be done by the autumn.

Funding worth EUR 3 B that will be handed to Turkey might be doubled to EUR 6 B, and decisions will be taken on whether to open new chapters in EU membership talks.

Costs for the return of migrants to Turkey from the Greek islands will be covered by the EU.

Separately, NATO is stepping its efforts to tackle people smuggling in the Aegean Sea by expanding its naval mission to cover Turkish and Greek waters.

Steps agreed to curb the migrant flow will affect more than 13 000 people stranded in northern Greece where only dozens of people are allowed to go into Macedonia on a daily basis.

The EU-Turkey agreement means that the bloc intends on closing down the co-called "Western Balkans route" which includes Greece, Macedonia, Serbia, Croatia, Slovenia and Austria for migrants willing to make it into Germany.

The agreement was reached at a summet that brought together the leaders of EU and Turkey on Monday and that was extended into the small hours of Tuesday.