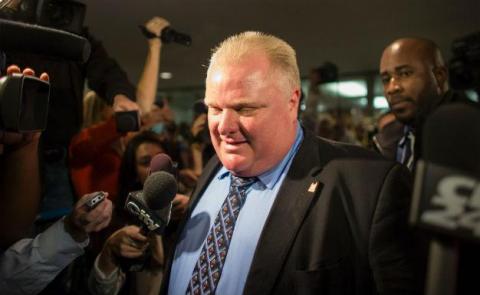 Former Toronto mayor Rob Ford, who made international headlines when he was caught using crack cocaine while in office in Canada's largest city, died on March 22 at age 46 after a battle with cancer.

The colorful and controversial Ford -- elected in 2010 -- earned worldwide notoriety in 2013 when he refused to resign after acknowledging that he had smoked crack during his tenure.

"On behalf of the people of the city of Toronto, I offer my sincere condolences to his loved ones at this time," said his successor, Mayor John Tory, adding that Toronto had been left "reeling" from the sudden news of Ford's death.

Ford was "a profoundly human guy whose presence in our city will be missed," Tory added in a statement.

Ford's family called him a "dedicated man of the people" and said information on memorial services would be announced at a later time.

Ford, an anti-tax populist, burst into the headlines in 2013 when an alleged drug dealer tried to sell a video of the mayor apparently smoking crack.

At first, Ford denied using the drug, but he later acknowledged smoking crack cocaine in a "drunken stupor," while saying he was not an addict.

Ford entered rehab soon after the emergence of the video, saying he had struggled to get a grip on his personal demons.

He defiantly vowed to stand for re-election in 2014, but in the end he opted not to run so he could undergo chemotherapy.

Tory, a moderate conservative, was elected in October that year to succeed Ford, bringing an end to a chaotic 18 months at Toronto city hall.

Despite hanging on in office, Toronto's city council had stripped Ford of most of...

History is written - teenagers schedule a duel in the US Open final!

5 Best Animes about Gambling to Watch