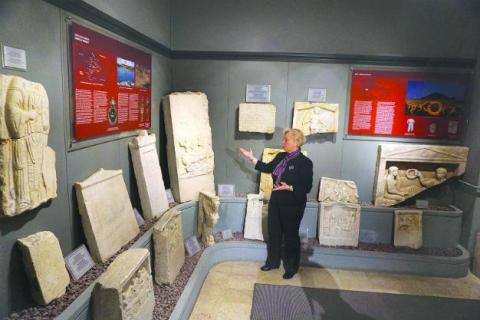 A large number of artifacts from the Thracian civilization have been unearthed during archaeological excavations which have been continuing for 16 years in the northwestern province of Tekirda?.

The Thracian people, who lived in Thrace, Bulgaria and Northern Greece in the ancient ages, were known as the world's most populous tribe after Hindus, according to Greek historian and ancient writer Heredot.

They were a group of Indo-European tribes inhabiting a large area in southeastern Europe. They spoke the Thracian language - a scarcely attested branch of the Indo-European language family.

Famous historic figure Spartacus was a Thracian enslaved by Rome who led a large slave uprising in southern Italy in 73-71 B.C. and defeated several Roman legions in what is known as the Third Servile War.

The head of Nam?k Kemal University's Archaeology Faculty, Prof. Ne?e Atik, said the civilization which gave its name to the Thrace region reached out to Bulgaria, Romania, Greece and western Anatolia
Stating that the amount of research and excavations related to the history of the Thracian civilization was less than other civilizations, Atik added, "This is why the artifacts unearthed in the ancient city of Heraion Teikhos in Tekirda? reveal facts about this civilization. The data we obtain in Tekirda? is very important. The historical data about Thrace is displayed in the Tekirda? Archaeology Museum. It is known that Turkey has many Thracian cities but Tekirda? is the first city to be excavated."

Atik said the Thracian people were warriors who lived in tribes, adding there were many aspects of this ancient civilization of various kingdoms which still needed to be brought to light.