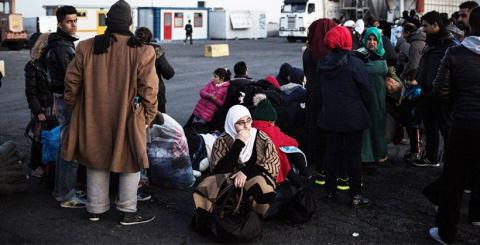 The situation on the refugee crisis in Greece is dire and is expected to deteriorate even further, according to the Hellenic Union of Coastguard Officers. The body released a statement with data showing that during the first 3 months in 2016 the average percentage of refugee and illegal immigrant arrivals in Greece was up by 1,277 percent compared to the 2015 over the same period, which corresponds to 145,027 people.

This translates into a steady daily inflow of 2,000 refugees and illegal immigrants covering the region of 20 islands between Lesvos and Kastelorizo. 72 percent of those that entered Greece in 2015 (613,506) arrived on the islands during the last 4 months of the year. This number is even more astonishing considering that from 2005 till 2104, with the Syrian conflict in full flight, the total number did not exceed 90,000 people. Other data indicates that in 2015 over 102,000 people were rescued in operations in the Aegean Sea by the Greek coastguard, while in 2016 so far those rescued have reached 43,185 people.

The officers of the Greek coastguard are warning that in the face of these numbers and the refugees expected to attempt to reach the Greek shores from the Turkish coast the crisis will exacerbate. In terms of the nationalities of the illegal immigrants entering Greece, the 2015 figures show that from the nearly 850,000 over 545,000 were Syrian, while the rest were from Afghanistan, Iraq, Bangladesh, Pakistan, Iran and Myanmar. There are grave omissions regarding the coastguard’s materials that hamper its ability to be more effective. The statement also underlines the great lack of technical and human resources to deal with the problems, adding that other types of support contributions like housing or rent subsidies were also absent.