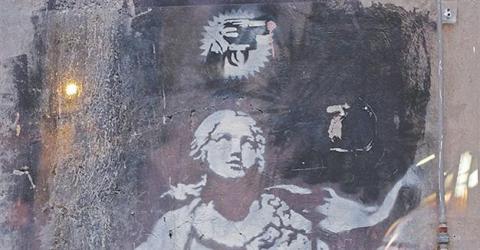 British street artist Banksy's only known surviving work in Italy, a Naples mural entitled "Madonna with a pistol," has been placed under a protective cover in the hope of preserving it.

The work, possibly a comment on the city's reputation as a bastion of both devout Catholicism and gun crime, is an image of the Madonna with a pistol in a luminous aureola above her head. It has proved a popular attraction for tourists visiting the city.

The move to ensure it cannot be destroyed follows a campaign by Banksy fan Alessandro Bello, who had collected 16,500 signatures with a petition calling on the local council to protect the work.

Bello was quoted as telling local media the protective screen had not been the work of the authorities. "It seems it was not the council but a private individual that did it, but the important thing is the work is now protected," he said.

Another Naples work by Banksy, a Bernini-inspired depiction of a female saint in a state of ecstasy with McDonald's fries and a coke on her lap, was covered in graffiti in 2010.

Numerous Banksy works around the world have been vandalized or painted over by rivals of the mysterious artist although this has become rarer as awareness of the value of his works has spread.In Photos: Car bomb attack hits Turkish capital, at least 37 killedIn photos: Easter celebrations around TurkeyFirst migrants arrive on Turkey's western coast under EU dealLocals return to southeastern town of ?dil after state-PKK clashesHalfeti - A town of mesmerizing beautyExhibition shows Istanbul through eyes of children Secret weapons of Turkish army: locally produced rocket launchers, missile systemsThe bugs of Ankara: The weirdest scenes that anyone can run into in Turkish capitalA bird's eye...