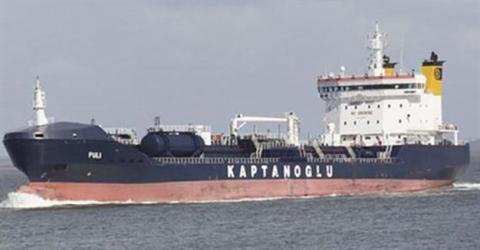 A Turkish ship, the M/T Puli, has been attacked by pirates in Nigeria, resulting in the kidnapping of its six-member crew, according to the Deniz News Agency.

The 148-meter tanker belonging to Kaptano?lu Denizcilik was attacked while it was traveling at 4 a.m. on April 11.

After the incident, Kaptano?lu Denizcilik released a statement, saying the crew was in good health.

Turkish Foreign Ministry, Transportation, Communication and Maritime Affairs Ministry and other relevant offices were contacted about the incident and the public will be informed on developments, the statement read.In Photos: Car bomb attack hits Turkish capital, at least 37 killedIn photos: Easter celebrations around TurkeyFirst migrants arrive on Turkey's western coast under EU dealLocals return to southeastern town of ?dil after state-PKK clashesHalfeti - A town of mesmerizing beautyExhibition shows Istanbul through eyes of children Secret weapons of Turkish army: locally produced rocket launchers, missile systemsThe bugs of Ankara: The weirdest scenes that anyone can run into in Turkish capitalA bird's eye view tour of Turkey's eastern provinces of Van and HakkariTurkish man with four wives has his 32nd childTurkish police raid Koza ?pek's media HQ in Istanbul amid protestsTurkey celebrates Republic Day against backdrop of political turbulenceLocal authorities in Ad?yaman stir outcry for sitting under tent as schoolkids get wet US destroyer completes exercise with Turkish NavyNew images of the construction of Istanbul's third bridgeTurkey marks the 77th anniversary of Atatürk's death with commemorations across the...