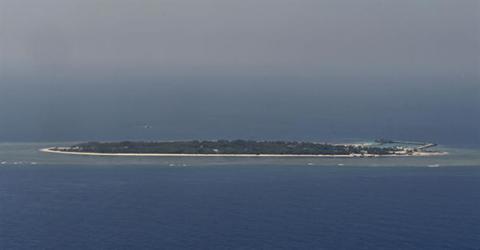 This aerial image taken from a C-130 transport plane shows a general view of Taiping island during a visit by journalists to the island, in the Spratlys chain in the South China Sea on March 23, 2016 - AFP photo

Beijing landed a military plane on a disputed South China Sea reef it has built up into an artificial island, officials said on April 18, in the first confirmation of such a flight.

China claims nearly all of the strategically vital sea, even waters close to its Southeast Asian neighbours, and has created artificial islands in an effort to assert its claims.

It has significantly expanded Fiery Cross, which is also claimed by Vietnam and the Philippines, drawing international criticism.

Beijing in January carried out several of what it called civilian flights to Fiery Cross, enraging Hanoi.

"On the Chinese territory, this kind of thing is not surprising at all," foreign ministry spokesman Lu Kang told a regular briefing.

"It is a good tradition of the People's Liberation Army to provide a necessary assistance to Chinese people in need," he added.

This weekend's flight came just days after US Defense Secretary Ashton Carter on April 15 visited a warship close to flashpoint waters, after announcing joint naval patrols with the Philippines.

On the day of Carter's trip, Beijing said that one of its top military officials had visited a South China Sea island.

Fan Changlong, vice-chairman of the Central Military Commission, observed building work, the defence ministry said, without giving a precise date or location for the visit....