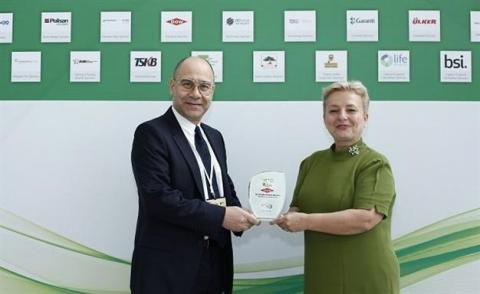 Dow Turkey announced in a press release on April 21 that it had received the Low Carbon Hero award at the Istanbul Carbon Summit, which was organized for the third time by the Sustainable Production and Consumption Association (SPCA).

Their thermoplastic polyolefin membranes, developed in cooperation with Dow client Multiplan Insulation Systems, helped the company win the award, according to the statement.

Necipo?lu pointed out that they employ 6,800 scientists and researchers and invest $2 billion in R&D annually, saying he had great confidence in their ability to make new scientific breakthroughs.

"One billion people have been added to the world population in the last decade alone. Therefore energy consumption has increased by 50 percent in the last 15 years. Water consumption has risen by 50 percent. However, 35 percent of the world's population experience severe water shortages and the new population of one billion faces food shortages. So productivity in food and agriculture must be increased, new water sources must be discovered and current water sources must be cleaned," Necipo?lu said.

He spoke about their solution for one of the world's biggest problems, food shortages, noting almost one-third of the world's food production is wasted, according to the U.N. database.