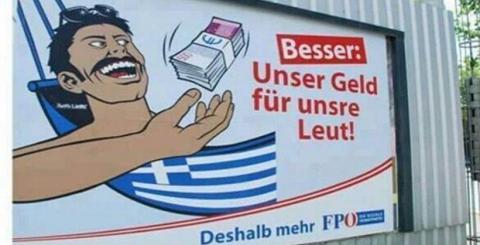 The astonishing rise of the extreme-right party, ‘Freedom Party’ (FPO), in Austria, after it defeated both the establishment parties in the first round of Sunday’s Presidential elections, has raised serious concerns. The party, which campaigned on a pro-closed borders and isolationist platform, used some very demeaning posters in its preselection campaign telling Austrians in a logo printed on a Greek flag with a caricature of a Greek person ‘our money is for our people’. Austria’s stance towards Greece has been very hostile on a number of issues, as its recent initiative demonstrated, when it called a a mini-meeting in Vienna on the refugee crisis without inviting Greece from the Balkan peninsula. It is the first time in Presidential elections that candidates from either the social democrats or the conservatives will not run for President of Austria.