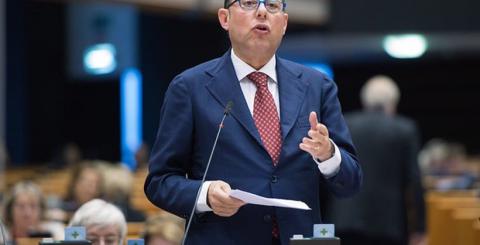 Head of the European Parliament socialists Gianni Pittella accused Germany and the IMF of trying to overthrow the democratically elected government of Greece. Speaking to ‘EurActiv.com’, Pittella expressed his outright opposition to measures foisted on Greece by the IMF and Germany in order to complete the country’s program review. ‘Berlin and the IMF want to see Greece sink’, said Pittella. He added that the socialist group in the EP would not allow a repeat of the 2015 ‘play’, pointing out that he was ready to take actions. ‘On the one had there is the IMF and on the other hand German sharks, of the Schauble ilk, who are trying to use distorted means to overthrow a democratically elected government and a nation that made great efforts, both economically and on the refugee front’, said Pittella. The Italian politician said it was ‘unfair’ and ‘abusive’ on the part of the EU to threaten Greece with a Grexit. ‘We say: No passaran, No passaran!’, he defiantly pointed out.