Meet the next sport of the modern age: Drone racing 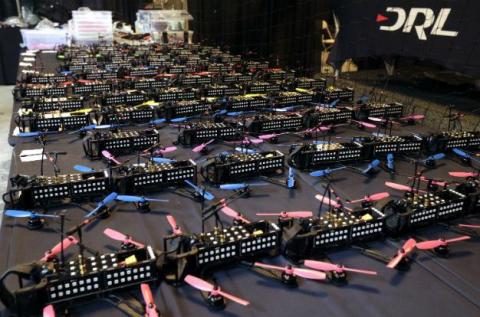 Decked out in high-tech goggles, pilot Steve Zoumas dives low and sees the final gate zooming toward him: a 20-foot-tall metal-framed box ringed with neon. Boom! His sight goes black. The crowd lets out a collective "Whoa!" as pieces of his aircraft, which has just smashed into a concrete barrier, go flying.

Zoumas is just fine, though; it's his drone that's toast. The pilot takes off his goggles and crosses to the pilots' lounge for the replay. Once again his quadcopter drone, a buzzing machine roughly the size of a loaf of bread, zooms daringly around obstacles and through hairpin turns; once again, it meets its demise.

"I was pushing it that lap," says Zoumas, a 31-year-old construction company owner. "I just wanted to put on a show for the crowd."

Welcome to drone racing, a would-be sport in which men, and a few women, fly remote-controlled drones against competitors at up to 80 miles per hour along looping courses with hairpin curves and drops. Many races take place in open fields, but here, racers and spectators have gathered in an abandoned, rubble-strewn mall set up with course-marking gates across two floors.

Racing is a labor of love for many pilots. Many are born tinkerers, and spend hours customizing their drones with new parts or building them from scratch. Some say they've spent more than $10,000 on frames, motors, batteries, propellers and camera mounts.