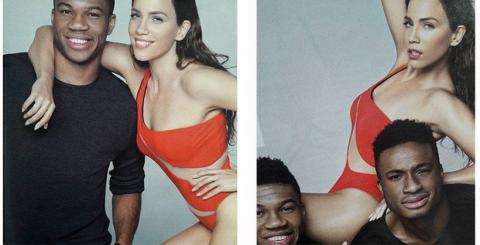 Milwaukee Bucks NBA star, Giannis Antetokounmpo (aka the Greek freak), and his brother Thanasis, who was drafted by the Delaware 87ers in 2013, took part in a sexy photo-shoot with Greek singer Katerina Stikoudi for magazine ‘Down Town’. The two brothers, who grew up in the rough Sepolia neighbourhood of down town Athens, were dressed in black, while the hot Katerina wore a red bodysuit. Giannis, who became the youngest player in NBA history to pass the 1,000 point mark in 2015,  said he was unfazed by all the celebrities he met in the USA, but admitted he was in awe when he met the President of the United States, Barrack Obama. The brothers said the bought a brand new car for their mother and a pair of rings for their parents to celebrate their 30th anniversary.