Verheijen: It is vital govt. respects deadline for 10 firms 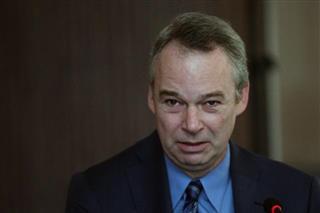 BELGRADE - What is most important to the World Bank (WB) is for the Serbian government to respect the deadline and remove the protection from creditors' claims against the remaining 10 enterprises in restructuring by May 31, World Bank Country Manager for Serbia Tony Verheijen said in Belgrade Thursday.

We believe that the deadline will not be changed, and that is the most important thing. The government should respect the deadline it set and lift the automatic stay in the case of 10 remaining enterprises, Verheijen told Tanjug.

He stated that the situation with these enterprises is complicated, but the authorities were obviously making effort to solve the problem.

There is an effort to find a solution for the for RTB Bor, Galenika, Resavica, Petrohemija and others. We know that the government is negotiating for at least three of the companies...

Stano calls on Pristina to allow Petkovic to visit Kosovo-Metohija

Vucic to seek explanation about EU's silence on Kurti statement

Vucic: Meeting with Putin to address all key political issues